I have been wondering how to get students managing their time better, to get the most out of writing lessons. I tend to break a writing lesson up into segments so students come and go from the mat throughout the session. However, there are some students who do not appear to write much in these times. By the end of the week, some students may have only written 3-4 sentences, when I know they are capable of writing a lot more than this. Other students are a lot more motivated to be writing for enjoyment and to inform an audience.

As a result of the needs of the first group of students, I trialled something new. After talking to students about the topic for writing, I gave them two minutes to write down as much as they could remember from what had been talked about on the topic. Interestingly, I had at least two sentences from every student who took part! In some cases, this was more then I would get in a whole writing session. Some students saw the activity as a competition to write as much as they could down. Others found it useful to be given a personal goal within a smaller time frame. Several students were quite amazed when they came to the realisation that they had written so much in such a short time frame. They were even more amazed when they compared this to the amount they had previously been writing during a whole lesson. Taking part in this speed reading activity helped them to realise just how capable they were at writing. As a result of this, I will give some students tighter time limits and goals in writing and clearer expectations of what I expect in each of these smaller time frames. I will see how this goes! 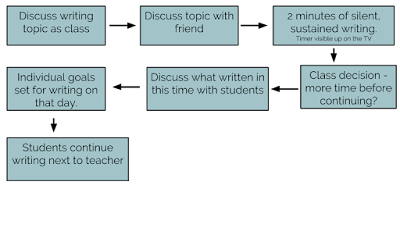 On another occasion, to motivate students in writing, several students created a screencast while they shared their ideas for a writing task with themselves or a friend. These students then went away with headphones to listen to what they said, and change their spoken words into sentences. This meant that when the students came back to work with me, they had ideas written down, which we could then work with to create a quality piece of writing. We were also able to work with these sentences to discuss important parts of speech/ grammar which were missed.

I plan to continue both of these ideas for writing into term 4.