The fun in note taking!

Our focus this term is the share element of the Learn-Create-Share pedagogy. When we share, we connect with people in the world we live in and contribute our knowledge, in an authentic way. Our audience is authentic when they CHOOSE to LISTEN to us and respond accordingly.

Today, we learnt the skill of sketchnoting. Sketchnoting is when you make notes through sketching (visually translate words into drawings). It can be used to record notes when listening to someone, or when reading something. Kathy Schrock clearly explains this in more detail here! Our task was to complete a sketchnote on something we had listened to, or read. Part of our discussion this morning was looking into the importance of sharing with an 'authentic audience.' My sketchnote briefly sums up this concept, which we read about in Dorothy Burt's post and discussed.

The process of completing my first sketch note took time, however I can imagine that through developing this skill, one would get much quicker at clearly recording their ideas in a graphic form. I thoroughly enjoyed this task, to the point the artistic side of it probably became too much of a focus, rather than the content I was trying to express! 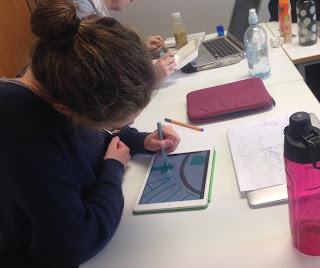 I used an app for the iPad called 'Procreate.' This would have to be my new favourite app which I think is going to be useful for many aspects of teaching, other than just sketchnoting.

Here is my sketchnote: 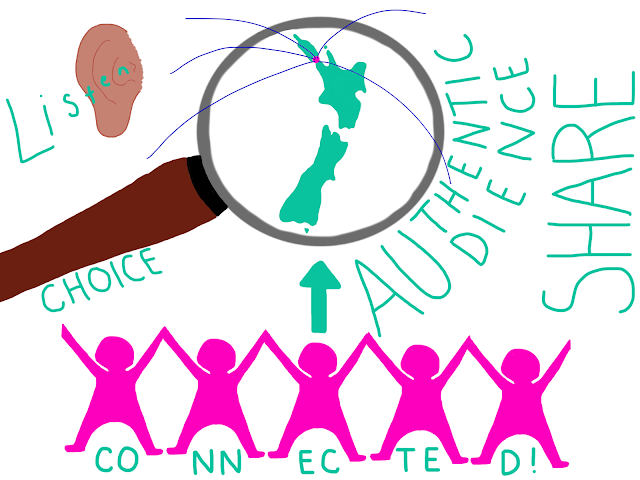 Sketchnoting is a great skill which many of our learners could benefit from. It is also another valuable skill which I am adding to my kete of ways to make learning rewindable! In order to get our learners using it, we felt it would need to be carefully scaffolded. As part of our PLG, we discussed how this would look. Suggestions included using google slides or keynote with pre-made symbols and words on the sides. After mastering sketchnotes using these provided elements, learners could then start developing skills to be able to organise and create their own sketchnotes!

Posted by HannahWest at 21:16 No comments:

I have had a light bulb moment with my inquiry and feel like I have found a clear path to follow! It sounds simple and straight-forward, but I have realised that learners are more likely to take part in discussions if they are engaged in learning! As a result of this realisation, I have stopped using a tool which was not having an effect I had hoped for. I was not prepared to continue using a tool which was not helping the learners.
The tool (a site) provided links to a number of prompts which learners could use to confidently take part in online discussions. Each of the orange buttons took learners to a number of sentence starters. 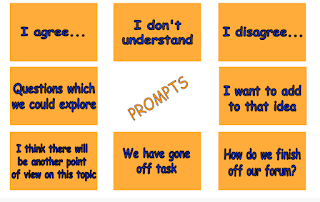 Through the site, learners could link to a google forum which started with a question to discuss around the reading(s). When learners did not actively take part or show motivation to take part in the discussion, I realised the tool was not what was required. In fact, observations and discussions with learners, showed me that I could do much more to engage learners in reading! So...what can I do to engage my learners more in reading?

Posted by HannahWest at 09:45 No comments:

Planning and creating a site for term 3: Olympics

I decided to attempt creating a site using the new google sites which had been released for us to trial. As soon as I began to use the new sites, I realised how much more restrictive it was compared to the classic google sites. I soon realised that to personalise the site as much as possible, I would have to create my design outside of sites, and then insert images and buttons into the site.

Our inquiry for term 3 is the Olympics. Our team is focusing on areas of the Olympics which may cause controversy or debate, such as use of technology, performance-enhancing drugs, the Refugee Olympic Team, and sponsorship. Therefore, this is the topic of this site. Check out the site, here.

The home page of this site is simple and takes the audience to the official Olympics websites, pages for some areas of interest under the 'Olympics Exposed' umbrella, two relevant Olympic youtube clips from the official Olympic youtube channel, and a page of fun facts. Unfortunately, with the new google sites, it is not yet possible to remove the horizontal navigation bar at the top (as can be seen in the image below). 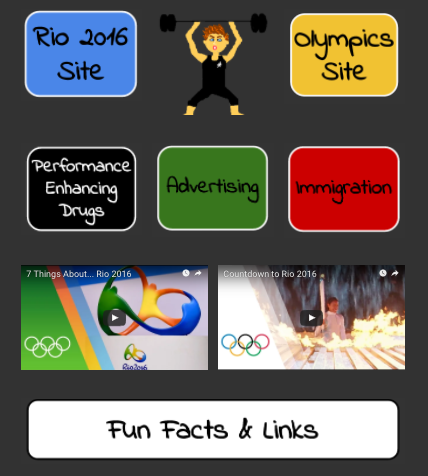 After creating what can be seen on this site, I realised that it was not yet possible to make the new google sites public on the web. I ended up sharing this site with the other teachers in my team, as a resource bank which they could then use. Even though this site did not end up being used with the students, I do not feel that it was wasted time. I will be able to continue adding to this site and will be able to repurpose it in future years when the Commonwealth Games or Olympic Games are next on.

During term 3, our team made some changes to how we structured reading. These changes coincided with school PD with the University of Auckland Woolf Fisher Research Centre. In our team, we undertook three 'focus topics' during the term and each of these focus topics lasted around three weeks. This allowed learning to be wide and deep. Related youtube clips were used to hook learners into the topics and to create discussion. Students were also provided with a larger number of texts to empower them in their learning. Links were also made between reading and writing where possible. You can check out what this looked like, here.

Since term 3 involved inquiring into our current practice and making collaborative changes as a team, this site did not get used as I had originally hoped. Reflecting, it could have been beneficial to have created a site for just one of these focus areas which we inquired into.

The practice at creating sites this year has allowed me to challenge myself for next year where I aim to complete a site which students can use regularly for a topic as part of their learning. I need to be thinking about how I can make the site interesting for the audience by not just adding links, but using buttons, videos, screencasts, audio, and more. This challenge for myself will involve combining the concepts behind sites like this Olympic site and the Comic and Sequential Art site (term 2), as well as the changes we made as a team to the structure of our reading programme during term 3.

Posted by HannahWest at 05:00 No comments:

Visiting other schools in the Manaiakalani cluster

This morning we observed classes in other schools in the Manaiakalani cluster.

At each school, I was fortunate to be able to spend time in a range of classes, from year 3 to year 8. In a year 3/4 class, we saw Learn-Create-Share in action, all interwoven into the one lesson!

Learn-Create-Share in action
Learn: Equal sharing strategies; discussing key mathematical ideas.
Create: A range of responses to the problem: 48 tins of cat food were shared equally between an unknown number of cats. How many cats may there have been and how many tins would each cat get?
Share: Learners were grouped into mixed-ability groups and were openly discussing the maths problem with each other. Learners were brought back together again and shared their ideas as a class. Learners were sent off again with 2 groups working together to help each other.

Digital Learning in action
In 3 different year 5/6 classes, I observed digital learning. We observed how a year 5/6 teacher made learning accessible to learners when a reliever was in the class. Learners were provided with a google doc with a range of activities to complete. As tasks were completed, learners highlighted the appropriate section of the table. I really liked how this provided learners and the reliever teacher with a visible way to monitor learning throughout the day. In another class, I observed learners creating chapter summaries of the text, The BFG, in preparation for a school trip.

Number of blog posts
In one class, I was made to reflect on the quantity of blogging by my learners. Learners had a goal of sharing five blog posts about their learning per week. My next step will be to think about how I could embed this as a part of my class every week. To work towards achieving this, I could create a regular 'blogging time' into the school day, where the focus is to blog about the process of something they are learning/creating.

These visits provided the chance to reflect on what I could be incorporating into my classroom or changing as a teacher. 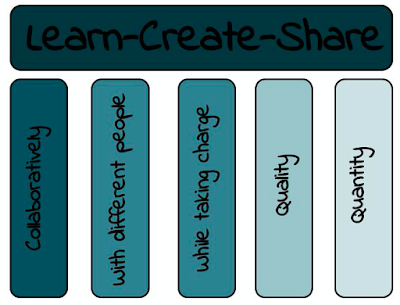 Posted by HannahWest at 10:16 No comments: